Thank you for your patience while we retrieve your images.

The clients were young, playful and enthusiastic; they wanted a garden that fit their Mediterranean lifestyle. Cevan christened it “The Roman Bumblebee” because the pool was surrounded by black and yellow slate tiles. He developed the theme throughout the landscape design by casting in place a series of concrete columns and pedestals colored with earthen tones of yellow ochre and charcoal pigment.

The property had challenging layout, a very deep lot, with a long driveway running to a large garage in the back corner. Cevan’s first move was to wall off the driveway and property borders creating an interior courtyard that opens onto the pool. The arbor and ochre stuccoed walls were planted with bougainvillea and fruiting kiwi. He bordered the pool with Italian cypress and kangaroo paw and created a verdant green space around the guesthouse with handcast concrete planters filled with bamboo, papyrus and powlwinnia tomentosum.

The garden vibrates with color, motion and sound. Cevan softened the sound of the falling water of the fountain by creating chains of bells that play a subtle soundtrack as the water runs through them.

The project enabled Cevan to develop his concrete casting techniques and contains extensive raised bed planters and a cast mosaic double sided sun lounge that can be utilized as a dining area. The dining / fire pit area is defined by cast concrete panels inlaid with mosaic mirror tiles that lend an incredibly intimate feel to the spot. As the garden has matured, it really has taken on the feel of a private Mediterranean oasis.
Forristt Landscape Design | San Francisco Bay Area | 408.297.8538 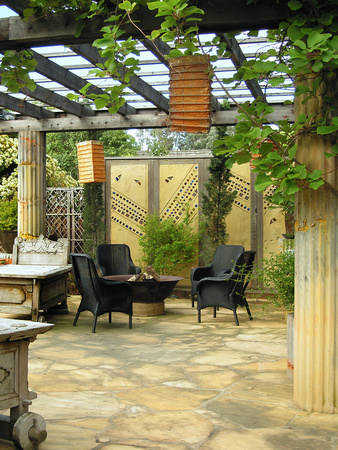